At present two competing views are being presented for the status of the American Presidency. 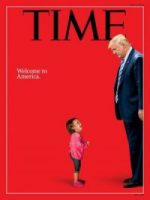 One view holds it is only a matter of long-overdue time before the final straw brings down the hot air blimp [can you identify the Twilight Zone episode that ended with exactly this result?]. At some point, the truth will be seen. The revulsion at the ugly incompetence of the bigoted narcissistic immature child who can’t tell the truth and who is devoid of sympathy, empathy, and knowledge, will cause a moment of truth and end this permanent stain on the fabric of American history.

An alternate view holds that he could walk down Pennsylvania Avenue in broad daylight, stab Lady Liberty again and again until she is bleeding from wherever, and not lose any support.

The first major test of second hypothesis occurred with the Access Hollywood tape. Surely that would bring down the presidential candidate. How could anything so disgusting and reviled for an adult (but mere locker room banter for an immature 13-year old) not be his undoing? As we all know, it wasn’t and didn’t even come close to being it.

Nonetheless, since as of the time of this writing, he remains the President, the alternate view has prevailed so far but the “final straw” people have not given up hope that Benedict Trump will get his just due.

Two questions which need to be asked here about his staying power are how does this happen and then why does it happen. To answer the first one (this blog), let’s step back in time many news cycles ago to the time when crying babies first became shock and awe before becoming just another story.

If a Baby Cries in the Woods and No One Hears It, Has a Sound Been Made?

Crying babies make for a very dramatic image. Crying mothers separated from their babies do as well. The bond between mother and child has been recognized since time immemorial as being a strong one. Images of separation are intense and gut wrenching. It is easy to understand why “final-straw” people might have concluded that the scenes from the border would at last be the final straw. How could such acts of depravity and cruelty not reveal the President as a monster to be destroyed?

That didn’t happen. Why not? One reason is that Americans viewed the crying babies through two different information sources. The “final-straw” people were inundated with emotionally powerful scenes. By contrast, on the Bulltrump network, the coverage was substantially different.  There are always new developments or old ones to be repeated about crooked Hillary, the foreign-born Moslem former president, the Hannity lovebirds and the Deep State. And, oh yes, there were the George-Soros financed actors (different from the ones at the gun massacres – his roster of actors must be huge!).  And where were these children separated from their mothers being sent? To summer camps! At the taxpayer expense!!! In other words, crying babies were fake news.

This pattern repeats itself on issue after issue. Are the redacted FISA papers another example of a NOTHINGBURGER from Nunes the Clown or proof positive of the greatest corruption scandal in American history? Sometimes it is hard to believe people are reading the same document. What station do you watch?

Keep Your Eye on the Ball

Another way to dissipate the intensity of the shock-and-awe of crying babies was through other events. For example, suppose you were pro-Trump and wanted to go to dinner. Should the restaurant be obligated to seat you? Should you be able to eat without being accosted or harassed? Incidents such as these provided the Bulltrump network with plenty of opportunity not to show crying babies to the detriment of the President, but to show verbal if not physical abuse by Progressives instead. Once events like these happen, the crying babies are no longer front and center.

And then there was Maxine Waters. She made it really easy for the Bulltrump network to avoid the crying babies.

Who Is the Face of the Democratic Party?

During the 2016 presidential election we learned a lot about the lesser of two evils. Perhaps never in American history had the two national political parties nominated two figures so reviled by people of their own parties yet alone by the other party and independents. When there is a political crisis now calling for the opposition party to stand up and be counted, who is the face of the Democratic Party who will be most visible to the American people?

Will it be Maxine Waters as it was during the crying babies shock and awe? Does that help the Democratic Party?

Will it be Nancy Pelosi as it has been for decades? Does that help the Democratic Party?

Will it be Chuck Schumer? No, because he isn’t even well-known enough to be worth showing on the Bulltrump network. He won’t generate a response the way Waters and Pelosi will.

How about the former Democratic President of the United States. I mean the most recent one. The previous one would only generate a feeding frenzy. Considering how often Obama is attacked, he certainly would be justified in fighting back. But does he really want to become a fulltime professional political mud wrestler?  Does he really want to get down and dirty day after day with no end in sight to combat the ceaseless stream of dishonesty and ineptitude emanating from the White House? His personality suggests otherwise.

What about the losing candidate from 2016? She certainly would seem to qualify as a potential voice of opposition. John McCain hasn’t become silent even as he fights a medical foe who eventually will triumph. Mitt Romney seems headed to the Senate. So the last two Republican presidential losers are still making their voices heard.

Undoubtedly the Democratic loser expected to be the new Andrew Jackson.  In 1828, Jackson leveraged into victory the claim that he had been deprived of the presidency he had rightfully won in 1824. Couldn’t history repeat itself in 2020 once all the facts were revealed about the Russian violation of the United States for the express purpose of defeating her? Wouldn’t all Democrats rally behind her so she would become the first female president of the United States as she should have been in 2016? So far, such support within the Democratic Party seems lacking. The Party has moved on? To what or to whom?

In the final analysis it helps to have a face to go with the opposition. At the 2004 Democratic Presidential Convention, Barack Obama became the face of the Democratic opposition. Four years later, he defeated the heir apparent in one of the great nominating campaigns in American history. Nothing like that has happened now. Like our president, the leading faces of the Democratic Party are in the eighth decade of their lives or will be soon. In part that may be why a Democratic congressional primary winner in the third decade of her life commands such attention. She is practically being coronated as the new queen of the Democratic Party.  Who else does the Party have to grab media attention nationally?

At this point it seems unlikely that the Democratic Party will have one figure around whom to rally until after the 2020 convention. For now at least, the final-straw people are forced to muddle on hoping that at some point the small Republican base will grasp the truth the whole world outside the Bulltrump network saw in Helsinki. Shouldn’t Russia gloating be a sign? Maybe traitor Trump exposed as Putin’s poodle will be the final straw…especially after Robert Mueller, witch hunter, documents it.

The Battle between 1619 and 1776: The New York Times versus the History Community

Why Did He Wag His Finger Now? – It’s Always about Him