People including the media should listen to Mary Trump. Oh sure, they buy her book, interview her, and cite her observations. But what they don’t do is incorporate her insights into their thinking. She said her uncle was child in the body of an adult. She said he had the emotional maturity of a three year-old. And, of course, she worried what he might do in a second term. She might have added what he would do in his only term if he thought that second term was in jeopardy.

Yet, despite these comments, the media continue to analyze the actions of the child in the body of an adult as if he were an adult. Consider the example of his “IQ” test. People have had a lot of fun joking about that “test.” They mock him for his claim that he aced the dementia test.

There is no doubt that “person, woman, man, camera, TV” has entered into American history. It may not quite rank with “Four score and seven years ago” or “We have nothing to fear but fear itself,’ but it will generate far more laughter. Quite possibly it will become the signature phrase by which this particular President is remembered. It certainly seems to be phrase of which he is most proud.

Think Child in the Body of an Adult

Let’s consider that phrase from Mary Trump’s perspective instead of the media’s rush to ridicule. Forget about what the test actually is in the adult world. Instead think about what it means to a child in the body of an adult with the emotional maturity of a three year-old.

Remember how excited he has been over knowing that Lincoln was a Republican. Remember how often he repeats that knowledge, how often he shares it with an audience as if since he only just learned something they didn’t know either. Now think of a child rushing home from school eager to share with Mom, Dad, or whomever about something exciting just learned in school that day. Think of how often the child bubbles up in wonderment and joy over this precious knowledge the child is sharing. Maybe you have such a child. Maybe you were such a child. Our President still is.

Tests are not his strong point. Who knows when he last took one? It wasn’t his SATs. It probably wasn’t in college either. Maybe he took one for his driver’s license. (Does he drive?) The very stable genius knows he wasn’t the smartest one in the class. He knows he did not do well on tests. Now look what happened. He aced one.

Again, forget about what the test is in the adult world. Think about what it means to a child in the body of an adult who never did well on tests. Everyone was amazed at how well he did. That probably means the testers did congratulate him on a job well done. After all, he was taking the test only because there was some concern that something had happened to his brain. We don’t know what it was (concussion, dehydration, vertigo, ministroke…).  Whatever it was, it was cause for concern. Once that concern was mitigated, yes, the testers probably did breathe a sigh of relief (Had the Vice President been contacted, just in case?). Naturally, our child in the body of an adult interpreted such praise as meaning everyone was surprised that he had done so well. Hardly anyone knew that Lincoln was a Republican. Hardly anyone does so well on the test either.

Keep in mind that an adult liar would never say the things he says. An adult liar would know better because it would be so easy to detect the dishonesty. A child in the body of an adult has no such qualms. Person. Woman, Man. Camera. TV. How many times did he say those words? Look at me! I am a very stable genius. I have been tested. [Think of how often Sheldon Cooper told the story of how his mother had him tested to prove he is not crazy.] 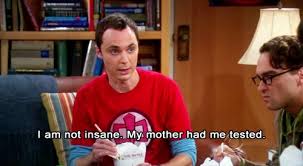 From the perspective of the child in the body on an adult with the emotional maturity of a three year-old, he is telling the truth. His world may be an imaginary one to you but that doesn’t mean it is not real to him. Instead of counting the 20,000 plus times he has been dishonest or misleading in the adult world, ask yourself if he has been dishonest or misleading in his world.

Conor Friedersdorf, The Atlantic, took this approach in his article “Maybe Trump Isn’t Lying” (May 19, 2020). He begins the article with well-known whoopers told by our wartime leader. He then segues into the ways The Washington Post, MSNBC, and The Daily Beast attacked, ridiculed, and mocked him for his lying. At that point, instead of continuing on this well-worn and self-serving trail of no productive purpose, he does something different from what the media normally do and continue to do. He examines the coronavirus crisis from the perspective detailed by Mary Trump even if he doesn’t use her words or know of her yet.

But what if Trump isn’t lying? Americans ought to consider an alternative explanation for the president’s many untruths: He does not grasp the most basic aspects of the public-health crisis.

Exactly. Suppose he genuinely is a child in the body of an adult and lacks the mental necessities and cognitive skills to understand the coronavirus crisis.

To document the claim of “cluelessness,” Friedersdorf refers to the various predictions made on the expected fatalities from the disease. As we are now on verge of 150,000 officially dead, the projections seem laughable if they weren’t so tragic. The magnitude of the error in these numbers causes Friedersdorf to ask:

Why did Trump keep offering estimates so unrealistically low that they were overtaken by events mere weeks later, exposing him to mockery and providing fodder for attack ads? Lies are typically self-serving. Those statements were not. If he was trying to lowball death estimates so that Americans would reelect him, he needed to pick a number that wouldn’t be exceeded until after Election Day. Whether he intended to lie or attempted to tell the truth, he showed an inability to think just weeks ahead in an emergency that could last months or years.

Exactly. He is a simple-minded immature child. He does not have the temporal perception to make such a calculation. He is a “now” person. Imagine asking a teenager to think about the consequences of an action taken or forgotten. The brain isn’t yet wired to think in terms of consequences, just “now”. Friedersdorf is correct to point out that our wartime leader can’t think in those terms and therefore he says things even an adult liar would not.

At this point, Friedersdorf raises an issue that frightens Mary Trump as well.

I used to worry that Trump’s serial mendacity might harm the nation. Now I worry even more that he isn’t lying, but rather lacks the capacity to see errors in the most obvious falsehoods. He appears to be so impulsive and attuned to the time horizon of an individual tweet, television appearance, or news cycle that he cannot strategize over a longer period.

Some Americans are willing to forgive lies from the president, but even they shouldn’t shrug off the possibility that Trump simply doesn’t understand the pandemic clearly enough to respond to it effectively.

Exactly. The coronavirus is an adult issue. The child in the body of an adult lives in the “now.”

Trump’s reputation for lying is well deserved. But many of the most glaring untruths that he has uttered during this crisis could be explained by ignorance and lack of foresight as easily as mendacity.

At 73, Trump is unlikely to stop his decades-long habit of lying. But assuming that all of his pandemic untruths are lies may obscure the degree to which he’s out of his depth. Is he fit to preside over the high-stakes effort to secure and roll out a vaccine? The many failures of understanding implied by his statements suggest that he is not.

His decision-making always will be made on what is best for him right now. That means what is best for a child in body of an adult with the emotional maturity of a three year-old. If he thinks his imaginary world is threatened and he won’t be re-elected, what will he do? Why is Mary Trump frightened? Remember when the protests were about police reform? Remember when the protests were about Confederate statues? Now the protests are about him. He dominated Lafayette Square. He called for the liberation of Michigan. Now he is taking back the country one Democratic city at a time. It’s always about him.