Anglo-Saxons are in the news. That may be a surprise. But which Anglo-Saxons? There are three different ways of answering the question:

In this blog, I wish to examine what has been happening in the last few weeks in an amazing confluence of actions including the media coverage.

In the current issue of Archaeology magazine, Laetitia La Follete, president of the Archaeological Institute of America, wrote her “From the President” column on “SUTTON HOO AND THE DIG.” Here is the opening paragraph:

Archaeology fans around the world got a treat early this year with the release of the Netflix movie The Dig. Focused on the discovery of the Sutton Hoo ship burial in Suffolk, England, on the eve of World War II, it tells the story of Mrs. Edith Pretty, a wealthy landowner who hired the polymath and self-taught archaeologist Basil Brown to excavate the mounds on her property. Once Brown realized he had found the remains of a ship, he and Pretty brought in a “dream team” of professionals, Peggy and Stuart Piggott among them, to methodically excavate Mound 1. The magnificent Anglo-Saxon royal ship burial and its opulent treasures that the team unearthed rewrote history. The finds’ glittering artistry, sophisticated design, and evidence of far-flung trade showed that the early seventh century in Britain was no Dark Ages.

The real Anglo-Saxons were a media phenomenon complete with a Netflix movie! La Follete announced in the column that in May she had interviewed Martin Carver, who oversaw the excavations from 1983-2005 under the auspices of the British Museum, the Society of Antiquaries and the BBC. Their mission: to give the site its context. What was a ship burial doing in seventh-cenury Suffolk: Why that? Why there? Why then? The interview was online so accessible to people around the world interested in Anglo-Saxons and/or archaeology. A second online lecture will be held June 24.

By coincidence, also in May a new book on the Anglo-Saxons was published. 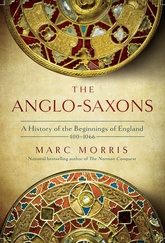 A quest for England’s origins

Sixteen hundred years ago, Britain left the Roman Empire and fell swiftly into ruin. Into this violent and unstable world came foreign invaders from across the sea, and established themselves as its new masters. The Anglo-Saxons traces the turbulent history of these people across the next six centuries. It explains how their earliest rulers fought relentlessly against each other for glory and supremacy. It explores how they abandoned their old gods for Christianity. It is a tale of famous figures like King Offa, Alfred the Great, and Edward the Confessor, but also features a host of lesser known characters. Through their remarkable careers we see how a new society, a new culture, and a single unified nation came into being.

Notice the timeframe: roughly from King Arthur to William the Conqueror, neither of whom was Anglo-Saxon. They are reminder of the presence of Celtics and Normans in England. One should add Vikings to the ethnic stew as well.

In an interview with Olivia Waxman, Time, medievalist Mary Rambran-Olin, an expert on race in early England, noted that even the early English did not call themselves Anglo-Saxons. The term developed in the 17th century as England wanted an origin story for its new empire.

If one has a genuine interest in Anglo-Saxons, just in the month of May there was a movie, interviews with an archaeologist and medievalist, and a new book from which to choose.

In the aftermath of the culture war Anglo-Saxons (see below), Washington Post published an article (4/26/21) by historian L.D. Burnett entitled “In the U.S, (sic) praise for Anglo-Saxon heritage has always been about white supremacy: Before the Civil War, Anglo-Saxonism was touted to defend slavery and conquest.” Burnett decries the “sinister use of Anglo-Saxonism” as nothing new. She wrote that the commingling of Anglo-Saxon blood and Anglo-Saxon tradition in the early 19th century was done in conjunction with the purported racial and intellectual superiority of White Americans.

Burnett researched the instances of newspaper usage of the term from 1800-1830 in the digitized newspaper database. The examples were few. “But between 1831 and 1840, the number of references to ‘Anglo-Saxon’ soared.” She attributes the dramatic increase first to the need of proslavery apologists contending with the moral and political pressure from the abolitionist movement. Second, she credits the increase due to the Texas war for independence which many Americans viewed in racial terms. Combined they led to an Anglo-Saxon racial manifest destiny to dominate the continent and the hemisphere. It was at this point that the designation of an ethnic group became divorced from its history and entered into the lexicon of American White racial superiority.

There is one slight flaw with this analysis of events in the 1830s. There is one event which she did not mention that calls into question her race-based interpretation. It can be summed up in two words:

Beginning in the 1830s, America experienced a demographic deluge by a people who were not considered to be white. The reaction by the English-speaking white people already here was much like the America First Caucus today. Here is an example from Samuel Morse (“Foreign Conspiracy against the Liberties of the United States,” 1835) prior to the invention of the telegraph when the Hudson Valley was being overrun by the wrong sorts of people:

Foreign immigrants are flocking to our shores in increased numbers, two thirds at least are Roman Catholics, and of the most ignorant classes, and thus pauperism and crime are alarmingly increased. . . . The great body of emigrants to this country are the hard-working, mentally neglected poor of Catholic countries in Europe, who have left a land where they were enslaved, for one of freedom. . . .[T]hey are not fitted to act with the judgment in the political affairs of their new country, like native citizens, educated from their infancy in the principles and habits of our institutions. Most of them are too ignorant to act at all for themselves, and expect to be guided wholly by others [the priests].

Morse’s ire against a supposed great papal conspiracy was, if not a majority opinion at the time, very popular. As always, the vote was the key:

we must have the [naturalization] law so amended that no FOREIGNER WHO MAY COME INTO THIS COUNTRY, AFTER THE PASSAGE OF THE NEW LAW, SHALL EVER BE ALLOWED EXERCISE THE ELECTIVE FRANCHISE. This alone meets evil in its fullest extent.

People define themselves in opposition to the “Other.” In the United States in the 1830s, the “Other” were the Irish Catholics and the true or real Americans were the Anglo-Saxon Protestants.

Again by coincidence, in May there was a new book out on the Irish in America: The Fires of Philadelphia: Citizen-Soldiers, Nativists, and the 1844 Riots Over the Soul of a Nation by Zachary M. Schrag.

In 1844 America was in a state of deep unrest, grappling with xenophobia, racial, and ethnic tension on a national scale that feels singular to our time, but echoes the earliest anti-immigrant sentiments of the country. In that year Philadelphia was set aflame by a group of Protestant ideologues — avowed nativists — who were seeking social and political power rallied by charisma and fear of the Irish immigrant menace.

For these men, it was Irish Catholics they claimed would upend morality and murder their neighbors, steal their jobs, and overturn democracy. The nativists burned Catholic churches, chased and beat people through the streets, and exchanged shots with a militia seeking to reinstate order. In the aftermath, the public debated both the militia’s use of force and the actions of the mob. Some of the most prominent nativists continued their rise to political power for a time, even reaching Congress.

The book is an account of the moment one of America’s founding cities turned on itself over the issue of immigration.

Schrag wrote about this in a blog for HNN in May, “In 1844, Nativist Protestants Burned Churches in the Name of Religious Liberty.” The subject of the Irish including before the 1830s was a three part series in New York Almanack by John Warren. One wonders how Burnett failed to mention the Irish in her column on the 1830s and why the Washington Post failed to catch such a glaring omission.

One final observation on the use of Anglo-Saxon before turning to the America First Caucus. During congressional debate over the 1924 Immigration Act, Senator Ellison DuRant Smith of South Carolina, said the following:

Thank God we have in America perhaps the largest percentage of any country in the world of the pure, unadulterated Anglo-Saxon stock; certainly the greatest of any nation in the Nordic breed. It is for the preservation of that splendid stock that has characterized us that I would make this not an asylum for the oppressed of all countries, but a country to assimilate and perfect that splendid type of manhood that has made America the foremost Nation in her progress and in her power, and yet the youngest of all the nations.

Nativists needed a way to explain why these immigrants—Polish, Russian, Greek, Italian, and Jewish—were distinct from earlier generations, and why their presence posed a danger.

Now we turn to the media sensation that launched the Anglo-Saxon “15 minutes” of media coverage, the America First Caucus. There are three obvious reasons why the simple-minded Anglo-Saxon Caucus was doomed from the start:

Did you hear the one about an Irish, Italian, and Jew who attended an America First Caucus? Perhaps one should add Sean Hannity to the list.

True, identity politics includes white people, too, but even a shred of thinking would have revealed the fallacy of this particular effort. In addition at the very moment Democrats are finally starting to realize that they do not have a monopoly on the vote of non-European immigrants and that these people do not necessarily accept the all-race all-the-time emphasis of the Woke, the America First Caucus is politically counterproductive.

In summary, one cannot help but notice the differing coverages of the current Anglo-Saxon contretemps.  One could choose from new books by scholars on the topic or watch a movie/interview. One could read responsible articles in Atlantic and Time about Anglo-Saxons in America. Or one could partake a politically-corrected view of history in the Washington Post.

Bonus question: One hundred years from on a history test you are asked to explain why American nativists were not Native Americans without laughing. What would you write?

One thought on “Anglo-Saxons – In History, Culture Wars, and Media Coverage”