What do alpha male Putin and alpha male wannabee Trump have to look forward to? The two losers are forever linked by the dual frontpage headlines above the fold on the print edition of the New York Times, November 10, 2022. Across the top, headline read “those who passed the litmus test to become approved Trumpican candidates lost in key states.” Just below, the headline read “In another major retreat in the special military operation, Putin withdrew his forces from the city he had just proclaimed annexed by Russia forever.”

At this point, the two men have an aura of loser surrounding them. What do they have look forward to in Ukraine or in the American political arena?

How many strategic retreats in a special military operation can one have before admitting defeat? 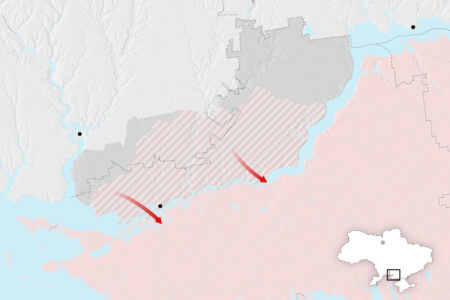 Putin failed in the effort to capture the capital.

Putin was pushed backed in the northeast.

Putin was pushed back across the river at Kherson.

Putin has had one partial mobilization.

Putin has scraped the bottom of the barrel to find bodies to throw into the battle.

Putin searched the globe for additional bodies so desperate is he for cannon fodder.

It is getting to the point where he could not defend Russia from an invasion by the Baltic States!

We are used to Russia absorbing the invasions from the west by Napoleon and Hitler before turning the tables. Now it is the Russian military forces which have reached their limit and have begun pulling back. Do you think there is going to be a second land offensive into Ukraine by Russia? Do you think the withdrawal of forces from Kherson is the last Russian withdrawal? Quite the opposite. It will be Ukrainians who will be pressing their momentum this winter.

More and more Russian families want to know what has happened to their loved ones. The task of hiding the truth will become more and more challenging.

The hope that European unity will collapse over the winter seems like wishful thinking. The American arms pipeline to Ukraine will continue. At some point the combination of sanctions and the spending on the war will take a toll on the lives on the Russian people.

Could what is happening in Iran also happen in Russia?

How many shoulders does Putin have to look over?

The course of events in Russia does not loom well for Putin because the course of events in Ukraine do not either. Since the Kremlin is far from transparent, it is hard to say what will happen. Putin could keep renewing his term in office until 2036 when he will be 86, but somehow it is hard to imagine him lasting that long. Putin’s “savvy” move to fulfill a Peter the Great destiny may turn out to be the dumbest thing he ever did. The moment of truth will occur when Putin no longer can maintain the illusion that he is Peter the Great, that he is restoring, that he is winning in Ukraine. When that moment comes, he my go ballistic.

What will happen then? He cannot just push a lever, turn a key, or press a button. Other people will have to carry out his orders. Will they?

Once before, an American President had to show the skill, foresight, and patience to let the Iron Curtain fall and the Soviet Union collapse in what Putin regards as the “biggest geopolitical catastrophe of the century.” Now another American President may have to do the same for the collapse of Putin.

Even as everyone in America is caught up in the election on 2022, life still goes go in the legal arena for the Loser. In one case, a judge ruled that Trump lawyers had to pay fines and receive sanctions for a frivolous lawsuit about a vast conspiracy of perceived enemies arrayed against him. Although I am not a lawyer and have not read the ruling, I get the impression that the judge had had it with the complete and total nonsense of Trump lawyers abusing the legal system for the political agenda of an immature child with the emotional maturity of a three-year old.

The case delivered a doubled message:

1. MAGA means “Make Attorneys Get Attorneys” meaning lawyers accept Donald Trump as a client at their own financial and legal peril.

2. Pay attention to the little case that don’t get much attention.  For example in case against the Trump Organization involving former Chief Financial Officer Allen Weisselberg, we already have seen the Trump lawyers show their willingness to throw him under the bus – it was all Weisselberg. Now Controller Jeffrey McConney has testified about the mechanics behind the financial skullduggery behind the payments to avoid taxes. One wonders exactly who is going to defend the actions of the Trump Organization. One wonders if other people are catching on that no matter how loyal they have been to him, he will not be loyal to them as Michael Cohen has been saying for years.

The Georgia Senate runoff scheduled for December 6 means any indictments either by the DOJ or in Georgia or both will be pushed back until after that time so as not to interfere with vote. Assuming the Democrats lose control of the House by no matter how small a margin, the House Select committee will be issuing its report shortly thereafter as well. In other words, it will not be “Happy Holidays” for the Loser.

It’s hard to see what Trump can do to escape the taint of being a loser. We know that stigma was something he has strove to avoid at all costs practically since childhood. We know that he made he made his loss the 2020 the litmus test for receiving his blessing in 2022. We now know that even though he is name was not on ballot in 2020, he is the President who is being blamed for being the loser while Joe Biden is taking victory laps.

On November 15, he will try to assert his power in the Republican Party. He will be meaner. He will be more insulting. He will be nastier. He will dare any wannabee from running against him. He will demand fealty. He will make the lives of McCarthy and O’Connell a living hell. The new litmus test will be supporting his candidacy in 2024 right now or feel his wrath.

While the Freedom Caucus has been garnering all the attention, what about the Real Republican Caucus. There were ten who voted for impeachment in the current Congress. How many will there be in the new Congress? Republicans who have had enough and are ready to move on? We may know soon from some votes.

At times, it is starting to look like “Murder on the Orient Express.” Everyone is coming out of the woodwork to castigate Trumpty Dumpty’s failure. 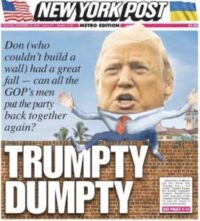 He is not used to being the ridiculed figure of failure from his own supporters. He lacks the maturity to deal with a situation where Republicans are eager to make fun of him and to talk about moving on.

Like Putin, Trump will have a moment when goes ballistic. However when that moment comes it means he will implode and become even more deranged. Even as we prepare for his announcement of his candidacy for 2024, he just may be a loser spouting hot air.