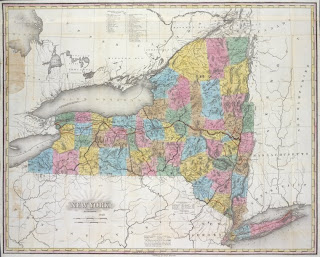 The great Yogi said “when you come to the fork in the road, take it.” Truer words of wisdom were never spoken. I thought of this gem of Americana following my recent post about the Path through History sign project.

Appropriately, I will be presenting two responses from two people from two different regions, one private individual and one public employee, one by email with attachments and one by email and phone call. The two individuals will remain anonymous and I will present their thoughts in the order in which they were received.

My post on June 25 concluded with the comment that the press release of March 8, 2012, announcing the Path through History project, represented the first step and now we await the second step. The response this generated was:

“I too, await the second step. And the third and fourth…


“I was selected for the Heritage Tourism advisory committee for our Regional Economic Development Council – which is where some of the funding is coming from. So this is an economic development initiative, not an educational one, although any funding for history is good and education will happen eventually.


“I have seen Heritage Tourism proposed several times before and not followed through, especially with ongoing, dependable funding, so I resent being called upon to re-invent this particular wheel. After attending the first meeting, I sent the attached document to all those on our regional committee. FYI.”

The email about the first meeting included the following:

“The folks on the regional committee I am communicating with are tourism and historic site people, convened to ADVISE the business types on the Regional Econ. Development Council. Our action item is to recommend a list of premier Heritage Tourism sites – for what purpose is unclear. This has been done several times already.


“There is Heritage tourism money in this year’s Economic Dev. Grant program, but the deadline is July 19 and we probably won’t be done with the committee work by then. The Gov was supposed to convene a statewide conference of all the committees ‘sometime in July’ but we know nothing more about that.”

The notes from the meeting itself continue in this vein. Without belaboring the point, here are some of the comments from an obviously disgruntled person for whom this project is not the first tourist rodeo.

“As I suspected, this is a re-invention of the Heritage Areas system concept and of the Heritage New York Trails program established by a former governor. Unfortunately, there seems to be no clear vision of what the end result should be this time. There is:


2. No agency clearly identified as having primary responsibility.


The Governor’s office and State Museum (Department of Ed) announced the Path Through History signage program. Are the Regional Economic Development Councils are developing a tourism component for their Economic Plans.Empire State Development? Not clear if that agency or its ILNY/Tourism Division is directly involved or not. Officials from the Department of Parks, Recreation and Historic Preservation organized the current Heritage Tourism workshops and said the Governor has a statewide vision. They then said we were on our own to develop a regional vision.


3. Will any representative of the Heritage Tourism community be added to the Councils?


We were told our role is to act in an advisory capacity to our Regional Council, but the only representative of our council in attendance was an employee of one Council member. How do we interact with the Council? Do we submit a report and go home to await their decision on our suggestions, or is there an ongoing role for us?


4. Since the Regional Councils compete with each another for funding, is it the our to make our Region the most competitive? This would be a decentralized, patchwork approach to tourism marketing. Patchwork quilts are nice…


5. We were also told the Governor has a state-wide vision for promoting Heritage Tourism more effectively than in the past. Are we crafting a Regional plan that dovetails with or will be integrated into a State tourism marketing plan? That would be a centralized, unified marketing approach. A mosaic picture made of many tiles…?


6. So where will the really big money be committed? To the State marketing effort or to the most competitive regions?


Our efforts will naturally need to be focused on meeting the goals and requirements of the funding source. Any tourism marketing professional will tell you that results can only be obtained through a sustained and well-funded effort. It takes years, even decades, to develop awareness and transform it into measurable action on the part of tourism promoters, motorcoach operators and significant numbers of individual travelers.


Programs funded by competitive grants that might not be re-granted in a subsequent round are a waste of money. (‘Didn’t we fund that last year? What about this NEW idea?’) There must be commitment of ongoing, dependable funding that will continue beyond the term of any given administration.


Please don’t repeat the past mistakes. NYSCA had a Tourism Grants program – one-shot funding. Heritage New York was a gubernatorial initiative. It redirected potential funding from already-established sites and programs. The grand vision is gone, a remnant remains in OPRHP. Legislative earmarks often sustained local vision and tourism but when they were ended, so was our funding. What will replace it?


In my opinion, if you want effective results,


1. Tell us who’s in charge
2. Define a clear role and relationship for us.
3. Tell us what the specific objectives are, not a vague goal of ‘economic development.’
4. And as the game show host said, ‘Show us the money!’ What exactly are we playing for?”

That was one response which raised concerns perhaps shared by people in other regions and perhaps not. Here is the second response quite different in tone and much briefer.

1. Unofficially, the NYSOPRHP has been taking the lead in coordinating the state participation in the councils with Ruth Pierpont having attended seven of the ten regional meetings.


I will add as a personal comment that this seems quite reasonable and perhaps that organization and individual should be designated the coordinator for developing a coherent statewide cultural heritage tourist program given the statewide presence of NYSOPRHP. Remember, we don’t want to be handing out brochures that still say Gov. Mario Cuomo as was done last summer.


2. The region of this individual has had a conference call with key high-level individuals with key themes and historic sites in the region to be identified perhaps drawing on previous work so as not to reinvent the wheel.

This individual has the reports from past efforts and is familiar with what has been done before.

In general terms the tone of the phone call was quite modulated and moderate compared to the more emotional anguish of the previous respondent. While not underestimating the challenges ahead, this person was quietly confident that the first steps had been taken and that the project would proceed in an orderly manner and achieve the desired results as least for the region of this individual.

Potentially the Regional Councils could become the umbrella group that ensures that all the appropriate voices in a region are heard. There still is the need for state leadership. For example, I received an email yesterday from a representative of an Iroquois organization inquiring about how that organization could raise awareness of it and it could be part of various history discussions. How many different regions would that cover for Heritage tourism and how will such tourism be coordinated if there isn’t effective state-wide leadership?

Peter Feinman founder and president of the Institute of History, Archaeology, and Education, a non-profit organization which provides enrichment programs for schools, professional development program for teachers, public programs including leading Historyhostels and Teacherhostels to the historic sites in the state, promotes county history conferences and the more effective use of New York State Heritage Weekend and the Ramble.