While the myth of no slavery in the North dies a slow and deserved death, many historical organizations are working to make their local story of the past more complete. This blog presents some current actions underway. It is not a complete survey. It includes items which I became aware of through newsletters, blogs, and notices which have been sent to me.

These examples are from:

Combined they reveal a range of possible actions that can be taken or one you can join if you are in Connecticut River Valley or perhaps replicate in another region.

“Slave Streets, Free Streets and the Landscape of Early Baltimore” is an article written by Anne Sarah Rubin, history professor.

Imagine strolling through Baltimore 200 years ago. The narrow, unpaved streets lead you past public markets and taverns, grand mansions, and tiny alley houses. The Federal Hill observatory towers over the harbor, its shipyards, and its wharves. As you leave the tightly packed streets near the water, the houses become farther apart, interspersed with the jail, a hospital, a seminary, an almshouse, long ropewalks. You pass fields and gardens, patches of forest and orchards. The virtual landscape in which you are immersed—because, of course, you have not traveled back in time—is beautifully textured and lavishly detailed, a Google Street View for the past. 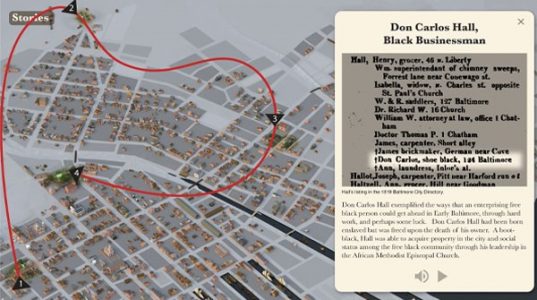 This view from Slave Streets, Free Streets shows Don Carlos Hall’s route from his shop on Baltimore Street to his manufactory, to his home, and then to Bethel AME Church.  Courtesy Lee Boot

The digital world was created Visualizing Early Baltimore, a collaboration between the Maryland Historical Society and the Imaging Research Center (IRC) at the University of Maryland, Baltimore County (UMBC) to build an accurate 3D model of the city and its terrain, land use, and buildings circa 1820. Sarah Rubin later joined.

I became involved in the project in 2014, when Dan Bailey showed it to me, and I was so enchanted that I insisted he include me in future collaborations. What I saw was, in Dan’s words, “a beautiful stage set.” But there were no people on the streets, no context describing early-Republic Baltimore in all its vibrant, problematic complexity, as described by historians like Martha Jones, Christopher Phillips, and Seth Rockman. There was no sign of the new immigrants from Europe and relocated country folk pouring into the city. The enslaved people who worked alongside free blacks and whites in the city’s shipyards and construction sites were similarly absent.

To read about how she brought the map to life, go to “Slave Streets, Free Streets and the Landscape of Early Baltimore.” 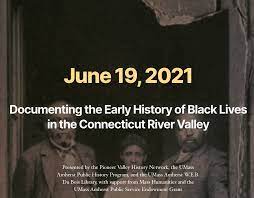 I became aware of this project when attending the online annual conference of the Massachusetts History Alliance last month. During a session, Marla Miller made a comment in the chat about this project. If you have excellent memory, you may recall she was one of the authors of Imperiled Promise: The State of History in the National Park Service, an NPS-commissioned study that I wrote a series of blogs about in 2017.

The webpage of this new project states:

Welcome to the webpage for Documenting the Early History of Black Lives in the Connecticut River Valley. This community-based research project in Hampden, Hampshire and Franklin Counties aims to document the lives of free, enslaved, and formerly enslaved Black residents of the Connecticut River Valley prior to 1900. Participating historical organizations, in collaboration with student and volunteer researchers, will perform a “deep dive” into their relevant holdings and present their findings in a fall capstone event.

This project launches on Juneteenth 2021 with a major public event, featuring noted scholars of Black history in Western Massachusetts, including a keynote by Whitney Battle-Baptiste. The first phase of this project will conclude on October 3rd, 2021, with a capstone event that reports out results and begins a conversation about Valley-wide initiatives to continue this work in the future.

As you can see, the project is very new with the launch scheduled for June 19, 2021. Unfortunately, due to a local Juneteenth program where I live, I was unable to participate in this online launch save for the last five minutes. That was enough time to ask in the chat if the program was recorded which it was (although not yet available). So if you are in the Connecticut Valley, please take this opportunity to participate. If you are in another region, please consider replicating and partnering with this group. One should notice the importance of college involvement in this undertaking. 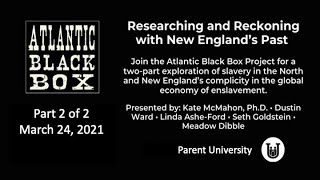 At the Massachusetts History Alliance conference in June, Meadow Dibble, the founding Director of Atlantic Black Box, and Tom Goldscheider, a public historian, made a joint presentation on slavery in Massachusetts projects. Dibble’s interest was piqued when she happen to notice while walking through a local cemetery a death in Africa. It made her wonder about involvement in slave trade of local Cape Cod people. She knew that Massachusetts legalized slavery in 1641, but she had questions about the colony’s and state’s involvement.

Answers were not readily available. Dibble concluded that Massachusetts and New England in general have not been discussing its extensive and longstanding investment in the Atlantic slave economy. New Englanders don’t know their own history.

People now are awakening to the notion that past is present and we have to deal with our past actions. Massachusetts and New England do not have the plantations and statues to the racist past and the people frequently are oblivious to the region’s own racist past in the stories we tell in our dominant narrative that we whites in the north were on the right side of history. She then challenged the participants to ask the following questions in their own community:

Although not stated, here is a potential template for the Connecticut Valley effort noted above. I suggested to Dibble that this subject was be good for a presentation at a social studies conference.

Goldscheider then applied these questions to the small village of Florence, MA. He commented on its abolitionist founding but that abolitionists were not necessarily regarded as heroes back then. He noted one important difference with the South: the freedom of speech and the press for abolitionists in the North. He cautioned that the high-school curriculum here is designed for teaching abolitionist history and that teachers should not frontload their politics. In Florence, 11 case studies were prepared including a packet of source materials and places in the community to walk to see where these people lived. The intention is to provide the students with the necessary information so they can formulate their own opinions. Massachusetts has a new civics program and Goldscheider wondered how it will apply.

In the Q&A, there were questions about how to do this in their own communities particularly if not an abolitionist-founded one like Florence. One guiding words of wisdom were not to finger point if you want community support.

Greenwich Historical Society hosted a ceremony on May 27th to honor the legacy of enslaved persons who resided in Greenwich. Four individuals were honored with a “Witness Stones Memorial” engraved with their name, known birth and death dates and primary occupations. The stones were placed on the grounds near Bush-Holley House where they resided. The intention is to expand recognition to include other people as more research is conducted.

The Historical Society collaborated with The Witness Stones Project on this initiative. It seeks to teach school-age children about enslaved persons in their hometowns using primary sources like deeds, wills and letters. Students and teachers from Sacred Heart and Greenwich Academy were partners in the program. They worked with the support of the Historical Society in researching the daily lives of the enslaved. The ceremony marked the culmination of their work over the past 18 months.

The quotations in the article express that the experience was a learning one for the historical society, the teachers, the students, and the government officials who participated in the ceremony. To read the article click here

The name of the organization created by Cathy Sears and Sarah Cox with the Irvington Historical Society is “Commemorate.”  They are creating a memorial garden to mark the putative site of a newly rediscovered enslaved African burial ground. Artwork by renowned sculptor Vinny Bagwell to honor this legacy will join the pantheon of Irvington’s historic monuments in a place of honor on Main Street. A second tribute-a memorial garden, benches, and plaque by the Hudson River-will honor the area where an enslaved African burial ground was once located.

The proposed design for the Commemorating Enslaved Africans in Irvington Memorial Project was unveiled by Bagwell at Irvington’s Juneteenth Celebration Rally on Saturday, June 19th, at the Main Street School. The title, “Yesterday,” evokes the notion that while slavery ended nearly 200 years ago, the myriad legacies of slavery persist and are as close to the present moment as yesterday. Civic engagement, education, and student-led tours are key parts of the proposal that Commemorate made to the Irvington school district.

These two commemorative projects are the result of years of research, a journal article, and several presentations by lead researcher and freelance journalist, Cathy Sears and Sarah Cox. To learn more about our research into the history of slavery in Irvington, read the article in the Irvington Historical Society’s Winter 2019 issue of The Roost, “Our Town & Slavery”. Click here Proposal to Irvington school district to see the Commemorate slideshow presented this last winter to the school district. Click here for more information regarding the Enslaved African Burial Ground.

10 thoughts on “Local Slavery: What Some History Organizations Are Doing”