Storytellers love stories of the stark clear-cut one-on-one showdown between the forces of light and the forces of darkness. The story we hear most now is the one between David and Goliath. While Putin and Zelensky will not meet physically in such a confrontation, they did meet cosmically on May 9, 2022 in the celebration of the victory of evil decades ago. The words and images also were weapons in the current war which convulses the land and wreaks havoc throughout the world. The current confrontation provides insight into the story that was told millennia ago and which is still relevant today.

4 And there came out from the camp of the Russians a champion named Putin, of Moscow, whose height was six cubits and a span and who rode horses bare-chested. 5 He had a helmet of bronze on his head, and he was armed with a coat of mail, and the weight of the coat was five thousand shekels of bronze. 6 And he had greaves of bronze upon his legs, and a javelin of bronze slung between his shoulders. 7 And the shaft of his spear was like a weaver’s beam, and his spear’s head weighed six hundred shekels of iron; and his shield-bearer went before him. 8 He stood and shouted to the ranks of the Ukrainians, “Why have you come out to draw up for battle? Am I not a Russian, and are you not servants of me? Choose a man for yourselves, and let him come down to me. 9 If he is able to fight with me and kill me, then we will be your servants; but if I prevail against him and kill him, then you shall be our servants and serve us.” 10 And the Russian, “I defy the ranks of the Ukrainians this day; give me a man, that we may fight together.” 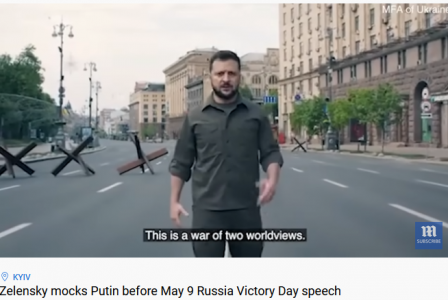 21 And the Ukrainians and the Russians drew up for battle, army against army. 23 As David talked with his brothers, behold, the champion, the Russian of Moscow, Putin by name, came up out of the ranks of the Philistines, and spoke the same words as before. And David heard him. 32 And Zelensky said, “Let no man’s heart fail because of Putin; I will go and fight with this Russian.” 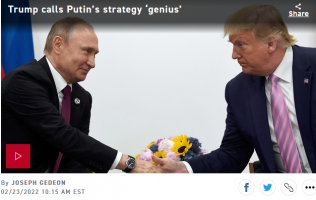 33 And Trump said to Zelesnsky, “You are not able to go against this Russian to fight with him; for you are but a loser, and Putin has been a man of war from his youth and he is a savvy genius.” 37 And Zelensky said, “Yahweh who delivered the Ukrainians me from the paw of the Nazis and from the paw of the Communists, will deliver me from the hand of this Russian.” 38 Then Biden clothed Zelesnky with his armor; he put a helmet of bronze on his head, and clothed him with a coat of mail.

40 Then David took his staff in his hand, and chose five Javelin smooth stones from the brook, and put them in his shepherd’s bag or wallet; his sling was in his hand, and he drew near to the Russian. 41 And the Russian came on and drew near to Zelensky with his shield-bearer in front of him. 42 And when Putin looked, and saw Zelensky, he disdained him; for he was weak and small.

43 And Putin said to Zelensky, “Am I a dog that you come to me with sticks?” And Putin cursed Zelensky his gods. 44 Putin said to Zelensky, “Come to me, and I will give your flesh to the birds of the air and to the beasts of the field.” 45 Then Zelensky said to Putin, “You come to me with a sword and with a spear and with a convoy of tanks; but I come to you in the name of freedom, Yahweh, the God whom you have defied. 46 This day Yahweh will deliver you into my hand, and I will strike you down, and cut off your head and your generals; and I will give the dead bodies of the host of the Russians this day to the birds of the air and to the wild beasts of the earth; that all the earth may know that there is a God in the Ukraine, 47 and that all this assembly may know that Yahweh saves not with sword and spear; for the battle is Yahweh’s and he will give you into our hand.” 48 When Putin arose and came and drew near to meet Zelensky, Zelensky ran quickly toward the battle line to meet the Russian. 49 And Zelesnky put his hand in his bag and took out his drones, his Javelins, his Stingers, and slung them, and struck Putin on his forehead; the stone sank into his forehead, and he fell on his face to the ground. 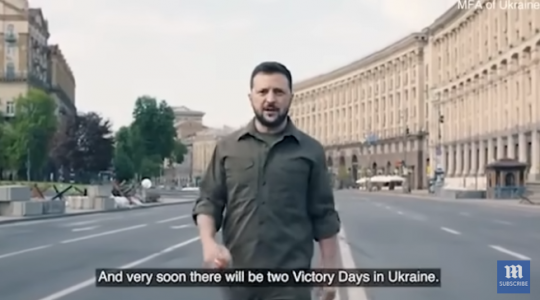 50 So Zelensky prevailed over Putin with a sling and with a stone, and struck the Russian, and killed him. 51 Then Zelensky ran and stood over the Russian army, and took his sword and drew it out of its sheath, and destroyed it, and cut off generals. When the Russian people finally saw that their army was defeated was dead, they rioted. 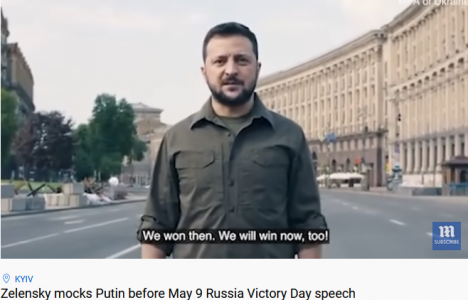 It is surprising how little the wording needed to be changed to tell this 21st-century version of the story.

Right now Putin does not know what to do.

The Ukrainian people did not welcome him.
He failed to take the capital.
His is failing to take the east.
His pride-and-joy ship sank.
He is depleting the Russian military so much that soon Poland and the Baltic States will be able to invade Russia instead of fearing an invasion by Russia.
He has strengthened NATO.
He has awakened the “arsenal of democracy” just as Japan did at Pearl Harbor.
His future is one of more and more pounding as the American arsenal becomes the Ukrainian arsenal.
At some point, even his generals will be able to read the handwriting on the wall.
He has no idea how to get out of the hole he has dug for himself so he just keeps digging.

It’s time for Joe Biden to send a special emissary to Moscow to find out what it will take to end this madness. It is time to send the Russian asset, the only American Putin trusts because he can dominate him. It is time to send Donald Trump to the Kremlin.