Our next presidential election will be the bicentennial of the election of 1824. That year might not ring a bell with people but it marked an important transition in American history. In that election, America transformed from what is called the First Party system to the Second Party system. The First Parties were the Federalists (Hamilton, Adams) and the Anti-Federalists/Republicans (Jefferson). The Second Parties were the Whigs (Clay, Webster) and the Democrats (Jackson). The “Stop the Steal” election of 1824 was the transition point. It occurred two years before the 50th anniversary of the birth of the nation just as 2024 will be two years before the 250th anniversary, a number that would have been outstanding to them.

Today we take for granted not only the two-party system but the existence of the two parties we have at present. The election of 1824 involved 4 major presidential candidates. While 2024 is likely to have fewer, there are four factions which will be competing for the top spot. In this blog, I wish to address two of them: the Democratic Party and the Diversity Party.

THE DEMOCRATIC PARTY VERSUS THE DIVERSITY PARTY

The modern Democratic Party as we know it emerged in the 1930’s under Franklin Roosevelt. Three of its components were the Irish (Joe Biden), the Italian (Andy Cuomo), and the Jewish (Chuck Schumer). It included white Southerners who especially since the 1960s, have migrated to the Republican/Confederate Party. It did not include Negroes who later became African Americans and who migrated from the Republican/Lincoln Party to the Democratic Party.

That era is over. Non-transgendered white male heterosexuals like Biden, Cuomo, and Schumer have no future in the Diversity Party. Candidates and appointees need to be diverse. I am not suggesting that this will be an instantaneous transformation at the federal, state, and local level. It will happen gradually through direct frontal challenges (the AOC election) and through attrition. For example, in my own congressional district a traditional Democrat was replaced by a Diverse person. Now all the Hudson Valley congressional representations are diverse. Cuomo already was challenged by a Diverse candidate. When he finally leaves office, the odds are a Diverse person will replace him. Similarly for Schumer.

This situation is playing out in California now. There is one Senate opening due to the incumbent being elected Vice President. Soon there will be a second one. The current Democrat is 87 years old and past her prime. Whether Feinstein steps down or hangs on until the end of her term, the Democrat will be succeeded by a Diverse representative. The different hyphen-groups already are jousting for the Harris seat. Perhaps there will be a compromise where one hyphen group gets the Harris seat and a second one gets the Feinstein seat. Welcome to the world of New York City Council elections.

Biden also faces the obligation to appoint people from the Diverse Party. He seems to be trying to do so with people who have diverse characteristics but Democratic Party values. Since he has many positions to fill, he has a lot of options as he juggles his responsibilities. He still can appoint non-transgendered white male heterosexuals instead of a diverse person as long as he explains why.

The Diverse Party is quite outspoken about its expectations from the new administration. Yes, they want a seat at the table in the room where it happens. They even can designate how many seats they want – more than a token. Similarly, they do not want seats in the back of the room by the kitchen door. They want to be seat upfront in seats of power and prestige.

The Diverse Party like the Tea Party a decade earlier is not likely to become a separate political party. It will continue to operate within the Democratic Party gradually building up its strength especially as the older Democratic officials retire or are retired.

The Diverse Party has its own convoluted lingo where words don’t mean what they seem to mean. Here are two recent examples from consecutive days in The New York Times.

For Democrats, Asian-Americans are suddenly crucial: They are the fastest-growing racial or ethnic group in the U.S. electorate…

What makes this comment so extraordinarily absurd? First, Asia is a continent. The word comes from the Greeks. They were referring to what today is Turkey where “Murder on Orient Express” was headed. Second, Asia is not a racial or ethnic group. Later on in the op-ed, the author acknowledges that “The category ‘Asian-Americans’ is not natural, for people in Asia do not typically imagine themselves as Asians, but rather identify with specific nationalities or ethnicities.”

In his bio, Nguyen is listed as covering South East Asia. That makes sense. He is of Vietnamese descent. The United States fought a long war in what was routinely identified as Southeast Asia. The Vice-President elect is routinely identified as being South Asian. The Boston Marathon bombers are of Central Asian descent. The area the Greeks referred to as Asia is now mainly Southwest Asia in academic studies and the Middle East in political discussions. And let’s not forget where Siberia is located.

“ASIANS” IS NOT A RACIAL TERM.
WHAT WORD DOES IDENTIFY THE RACE OF THE PEOPLE IDENTIFIED AS ASIAN-AMERICANS? CAN YOU THINK OF ONE? 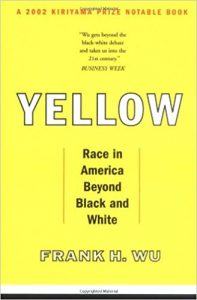 Here we see the nonsense of the politically-corrected terminology that twists people into absurd knots. Now we know that Asian-Americans are a people of no color who do not include all Americans of Asian descent and who have no name for their race. How progressive.

In this example of twisted reporting, Deb Haaland, the article mentions:

native as an adjective once
Native as a noun once
Native America six times
Indigenous three times
Indian twice as part of the name of government entities.

Can you imagine an article on Joe Biden where he is identified as Irish, Celtic, European, and white during the course of the writing?

One might think that government entities responsible for Indians means that the people over whom they are responsible are Indians. That is true but politically incorrect. Instead the reader is treated to a plethora of terms. Indians do know that all people born in the United States are native Americans. Indians should also know that no native Americans should be privileged over any other native American. Indians however have what the Southeast Asians and East Asians do not have: a real name for themselves – INDIAN.

According to this article, Elizabeth Kronk Warner, dean and professor of law at the University of Utah, and a citizen of the Sault Ste. Marie tribe of Chippewa INDIANS [and presumably of Utah, too] said:

It’s momentous to see an INDIAN promoted out of the shadows of American history to a seat at the table in the White House. Tribes and the federal government have a relationship that goes back to the 18th century ⸺ but despite that relationship we have never had an American INDIAN at this level of government.

Apparently the only ones who can use the term “Indian” are Indians themselves. While that is somewhat of an exaggeration, it isn’t by as much as it should be.

As we head towards the 1824 Presidential Election Bicentennial, it is reasonable to anticipate that the Diversity Party will become more and more insistent that politically-corrected vocabulary be used that no matter how convoluted and distorted it is. It is reasonable to anticipate that the Democratic Party will follow the lead of the Diversity Party. It is reasonable to anticipate that more and more white people will object to the microaggressions of having to toe the Diversity Party line or be subject to the Thought Police. What is not known is whether the opposition will stop being the party of stupid cowering weenies in the face of this politically-corrected assault and will realize the opportunity it presents if it was capable of being the party of Lincoln.

More to come on the 1824 Bicentennial.

Historians vs. David McCullough – The Pioneers: The Heroic Story of the Settlers Who Brought the American Ideal West

Make Room at Gitmo: The Trumpicans Are Coming