Let’s review various events in American history to gain a sense of what Columbus meant to the country even before the wave of Italian migration began.

In 1775 on the eve of the American Revolution a poet wrote “His Excellency, George Washington” using the Columbia symbol.

Celestial choir! enthron’d in realms of light,
Columbia’s scenes of glorious toils I write.
While freedom’s cause her anxious breast alarms,
She flashes dreadful in refulgent arms.
See mother earth her offspring’s fate bemoan,
And nations gaze at scenes before unknown!
See the bright beams of heaven’s revolving light
Involved in sorrows and veil of night!

The goddess comes, she moves divinely fair,
Olive and laurel bind her golden hair:
Wherever shines this native of the skies,
Unnumber’d charms and recent graces rise.

The poem lauds Washington and the cause of freedom. Eventually Washington did meet the author of the poem. The author’s name was Phillis Wheatley, a very recently freed slave in Massachusetts by way of Senegal. The use of female Greek goddesses to represent countries was not new; her selection of the name Columbia for the colonies who had not yet declared their independence apparently was.

Regardless of whether or not Wheatley was the first to employ the name Columbia, the female version of Columbus, the name certainly stuck [one always has to wonder how the audience would have understood the symbol if it had never been used before but then again somebody has to be the first].

In 1784, King’s College reopened after the conclusion of the American Revolution as Columbia College.

In 1789, Washington took office to the music “The President’s March”. Then in 1798, the music acquired lyrics and a new title “Hail, Columbia.”

While “Hail Columbia” is no longer the unofficial national anthem, it did become the official anthem of the Vice President to this very day.

In 1791 in between the composition of the music and the writing of the lyrics, when the City of Washington was assigned to a Federal District, it was named the District of Columbia.

In 1792, the first recorded celebration of Columbus Day in the United States took place on October 12. The Society of St. Tammany, also known as the Columbian Order, commemorated the 300th anniversary of Columbus’ landing.

Around 1843, another unofficial nation anthem was composed entitled “Columbia, the Gem of the Ocean.” It sounded remarkably like “Britannia, the Pride of the Ocean” and I will leave it to the scholars to debate the relationship. 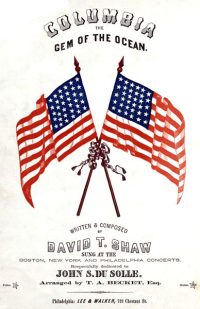 A Goddess of Our Own: Columbia and American Naval Hyper-Identity
Stephen N. Sanfilippo, Maine Maritime Academy

A new breed of sailor carried a new flag to the oceans and seaports of the world during the late 18th through mid-19th centuries. This new breed of sailor was the “Columbian Tar,” and he had a goddess of his own – – – “Columbia.”. This presentation analyzes the creation of an American enlightenment goddess, “Columbia,” as a contra-distinction to the overthrown “Britannia.” More than a nickname for the United States, or a poetic metaphor for America, “Columbia” was the divine embodiment of natural rights, constitutional liberties, the virtuous republic, and the forces that defended them. Placed into an ancient pagan setting, rather than one of American Protestant Christian “Providence,” “Columbia” proclaimed a special and uniquely endowed People. The frequent use of “Columbia” in naval and shore defense ballads and anthems of the Early Republic through the Civil War created a particular form of hyper-identity of the American naval sailor. Praised as “Columbian Tars,” this breed apart was the sons of the male god of war, Mars, and a female goddess, the American Athena, “Columbia.” Broadside ballads and formally composed naval anthems celebrated American victories on the high seas and in coastal defense against the French, the Barbary States, the British, and the Confederacy with such lines as “And ne’re shall the Sons of Columbia be slaves,” “Rejoice, Columbia’s Sons, Rejoice,” “Ye sons of Columbia, O hail the great day, which burst your tyrannical chain,” and “Columbia Tars are the true sons of Mars;” which will be performed by the presenter himself.

In 1896, Columbia College became Columbia University. One year later in moved uptown to its present location.

In 1899, Udo Kepper in the political cartoon entitled “Japan makes her debut under Columbia’s auspices” portrayed Japan, England, and America through female symbols along with Russia, Turkey, Italy, Austria, Spain, and France.  The continued use of Columbia reflects that the Statue of Liberty had not yet attained the iconic status it has today as a symbol of the United States.

However, the big event of the 1890s was not for Columbia but for Columbus. The World’s Columbian Exposition in Chicago in 1893, celebrated the 400th anniversary of Columbus’s voyage in 1492 [yes, they were a year late!]. It was a celebration of huge proportions and known throughout the land.

These Italians did not have the same option in becoming Americans as the Irish immigrants who also were not white when they arrived. The Irish linked themselves to the war for independence from Great Britain. While the Irish in America during the American Revolution did participate in it on the American side, it was the celebration of freedom from British rule that clearly resonated with them in the 19th century. In New York City, the Irish loved to celebrate the anniversary of Evacuation Day, November 25, 1783, when Britain finally pulled out after seven years of occupation. Of course, George M. Cohan’s 1904 version of Yankee Doodle Dandy strengthened the connection between the Irish and the American Revolution.

The Germans who also were not white when they arrived had the option of going back even further in time. The Germans in the 1890s were able to look back on the German settlement in and contribution to America beginning in the colonial era in the late 1600s. They could favorably compare their colonies to those in New England and elsewhere in the cause of freedom.

The Italians joined the Germans and the Irish in not being white when they arrived and went back even further in time to link themselves to the American experience: all the way to Columbus, a person they knew America already revered. Those efforts would take physical and calendric form.

In conjunction with the World’s Columbian Exposition, New York City erected a statue of Columbus at Columbus Circle at Columbus Avenue. A commission of Italian businessmen from around the United States contributed 60% of the funding needed to build the statue. The statue was constructed with funds raised by Il Progresso, a New York City-based Italian-language newspaper. (“FROM ITALIANS TO AMERICA: THE GREAT STATUE OF COLUMBUS TO ADORN NEW-YORK,” The New York Times, July 9, 1890.)

The Italian-Americans also promoted the creation of a holiday in honor of Columbus.

[T]he Knights of Columbus, an international Roman Catholic fraternal benefit society, lobbied state legislatures to declare October 12 a legal holiday. Colorado was the first state to do so on April 1, 1907. New York declared Columbus Day a holiday in 1909 and on October 12, 1909, New York Governor Charles Evans Hughes led a parade that included the crews of two Italian ships, several Italian-American societies, and legions of the Knights of Columbus. President Franklin Delano Roosevelt designated Columbus Day (then celebrated October 12) a national holiday in 1934.

It should be noted that the day in various forms is recognized in other counties in Europe and the Western Hemisphere.

These recap brings us to the controversy today over Columbus Day.

Here are some excerpts.

“It’s just outrageous and the line needs to be drawn,” said Assemblyman Ron Castorina (R-Staten Island). “It stands for the pride that Italian immigrants have for their contributions to America. To call it anything other than that is completely misguided,” he said. “This is part of a left wing agenda which attacks Columbus. They revise history to support a narrative that works for rebuking Columbus.”

Councilman Joe Borelli (R-Staten Island) added in a letter to de Blasio and [Council President] Mark-Viverito that the planned task force had opened a “tremendous can of worms” and should not meddle with “a revered figure in Italian-American culture.” “Our past historical leaders are not without sin, nor are our current ones,” Borelli said, flanked by several officials sporting American and Italian flag lapel pins and at least one protester clad in an Italian flag sweatband, waving an Italian flag in the background. “We shouldn’t be foolhardy enough to judge people from so long ago with our modern eyes,” Borelli said. “If that’s the case then surely we are set to lose monuments and parks named after people like Andrew Jackson, like FDR, like Ulysses S. Grant.”

But Councilman Jumaane Williams (D-Brooklyn) said Columbus should go, calling him “the biggest genocidal murderer the globe has ever seen.”

“NYC could be a town without heroes if PC insanity wins out” Steve Cuozzo, New York Post, August 26, 2017.

As you can see from these comments and headlines, the issue of Columbus is very much connected to the culture wars that are currently dividing America. You almost get the impression that if Columbus had not sailed the ocean blue in 1492 that Europeans, smallpox, and genocide never would have occurred and that the United States would not even exist as a country since there would have been no one here to declare independence from England. Such ruminations also reveal that the issue is only partly the individual human being Christopher Columbus. It is a clash between the America noted in the above examples the America of Howard Zinn in A People’s History of the United States (1980).

What does all this mean about the fate of Columbus Day?

1.Italian-Americans are not a politically correct people. Therefore they can’t be disrespected and there is no need to be sensitive to their feelings (unless there are a lot of them in your political district).

2. The Italian-American goal to become part of the melting pot is politically incorrect. They should be striving to preserve their authenticity as a hyphen and not be absorbed into the vision of e pluribus unum.

3. Just as it is now illegal to dance to the music of Michael Jackson, laugh at a joke by Woody Allen, or watch anything involving a #MeToo person, so Columbus is to be cleansed from our midst. Therefore it is incumbent on Americans to purify the country of its sins and the stains on the social fabric.

As should be obvious, more than a single individual is involved here. The stakes are the entirety of American history and therefore of America itself.

In the next blog, let’s turn to the proposed alternative to Columbus Day and to what Indigenous Peoples’ Day means for American history.