Tom Hanks and Donald Trump were the subject of the blog Tom Hanks versus Our Immature Child-President (August 8, 2017). The blog compared the characteristics of the two 13-year olds in the bodies of adults, one in the REEL world and one in the REAL world. It was easy to contrast the two (one could read a book the other couldn’t). The primary basis for the difference was that the Tom Hanks adult was based on a level-headed child while the Donald Trump adult was based on an immature child as father Fred Trump well knew when at age 13, he shipped Little Donee Waney off to military school in the vain hope that he would grow up.

Without knowing it, that blog anticipated the issue we are now facing with the coronavirus. Here is what I wrote about the Tom Hanks character:

Tom Hanks’s job was to play. His job was to utilize what appeared to adults to be his child-like sensibilities to play with toys. He job was to maximize their economic value by designing toys that better appealed to actual children. The joke was that no one realized he really was a child. Still, no one ever considered putting him in charge of the manufacture of toys. No one ever considered putting him in an administrative position. He had the perfect job that matched his abilities: being a child.

As an intelligent level-headed child in the body of an adult, Tom Hanks knew the difference between work and play. He had no objections to fun and chaos but no one would ever put him in a position where he had to managed adults or function in an organized manner. He hadn’t yet reached the maturity where he could do such things. That time was still off to the future. By contrast, the ignorant immature child in the body of man now in the White House when he isn’t out playing golf, never reached that level of maturity. He is only capable of chaos. It is not a management-style choice by adult, it is the limit of his mental capabilities as an immature child.

Children are not prosecuted as adults because they lack the capacity to know right from wrong and to recognize that actions have consequences. They simply lack the mental necessities to function as adults and are not expected to (excluding the stories of the parentless children where the oldest now has to act as the parent to the younger siblings).  Children have imaginary friends. Children make up stories. Eventually they outgrow them except for those who become novelists, comic book writers, or who write screen plays in Hollywood who can tap into that childhood sensibility.

Now We the People are dealing in the real world with a President of the United States who does not have the mental necessities to function as an adult in the real world. He still lives not in an alternate reality, an adult term, but the make-believe world of childhood.

Take for example the incident where a group of young girls ganged up on Senator Dianne Feinstein. Regardless of the specific topic and regardless of whether you agreed with those children or not, would you consider putting them in charge in the adult world? Obviously not.

Now think of young voters in the 20s. They may live at home with a parent or parents. They may be covered by the insurance of a parent…or maybe they aren’t anymore. They may have student loans. They may not have a 9-5 job with pension and medical benefits and instead have a random schedule of “shifts” in a gig economy. Is that the traditional image of young adulthood?

Think of Friends. In the pilot, Rachel Green abandons her wedding in her wedding dress, a traditional path to adulthood for women. Instead she runs off to the city. The next day she goes looking for the “job thing.” She returns to the apartment which is a steal due to rent control and announces that she is qualified for nothing. Yet she is surprisingly happy. She displays the source of her happiness: some expensive boots she just bought on sale. Wouldn’t you be happy?

She is asked how she paid for the boots. The answer mumbled under her breath is that her father pays for the credit card. Her friends then encourage her to cut the cord. CUT! CUT! CUT! She cuts the cards. “Welcome to the real world. It sucks.” Rachel did not have a rich daddy who could give her $413 million on her way to becoming the biggest financial loser in American history. The principle is the same. There is a transition from being the child dependent on the parent to being able to take care of oneself. That does not mean cutting all ties with parents. It refers to the American Dream of being able to make something of your life. In Friends and the Big Bang Theory, these twenty-somethings venture out into the adult world and through many trials and tribulations (so the shows can keep going year after year!) they finally reach the cusp of adulthood, married with child and maybe a house, the starting point for Father Knows Best, Leave it to Beaver, and The Dick Van Dyke Show from the old days.

By contrast, Little Donnee Waney remained trapped, through no fault of his own, as an immature child in the body of an adult who never grew up. Consider these comments.

Would an adult liar claim there are only 15 cases of coronavirus in the United States? No, because an adult would know that claim would be too easy to fact check and he would be exposed as a liar, idiot or both in a few days.

Would an adult liar claim those cases would go down to zero in a few days? No, because an adult would know that claim would be too easy to fact check and he would be exposed as a liar, idiot or both in a few days.

Would an adult liar claim that a vaccine would be ready and available shortly? No, because an adult would know that claim would be too easy to fact check and he would be exposed as a liar, idiot or both in a few days.

Would an adult liar claim that one day soon the coronavirus would disappear like a miracle? No, because an adult would know that claim would be too easy to fact check and he would be exposed as a liar, idiot or both in a few days.

If you are serious about wanting to understand how the mind of Little Donnee Waney works, don’t consult an adult psychiatrist, ask a child psychiatrist. They can explain how the brain develops and did not it this case.

If you are serious about wanting to understand how the mind of the seventh-grade-smart-aleck-dumb-aleck works, ask the people most familiar with them people: a seventh-grade guidance counselor or seventh-grade teacher. Or go to a high school or college reunion where there is bound to be at least person who never fully grew up.

In 1986, after the Challenger disaster, Ronald Reagan said:

We will never forget them, nor the last time we saw them this morning as they prepared for their journey and waved goodbye and slipped the surly bonds of earth to touch the face of God.

People can rise to the occasion in a crisis.  Can you imagine if the person who just delivered the worst presidential address ever even tried to say something inspiring? By contrast our immature child president is limited to

LOCK HER UP!
BUILD A WALL!
FAKE NEWS HOAX! 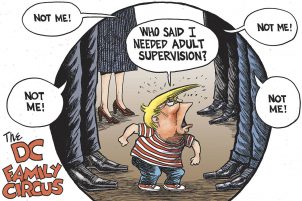 No. I don’t take responsibility at all.
I don’t know anything about it.
It’s a nasty question.

That’s the limit of leadership We the People can expect from our immature child-president whose natural venue is the professional political wrestling arena. Unfortunately We need more.