January 6, 2021 may join December 7 and 9/11 as dates that will live in infamy in American history. Right now it is too early to tell. Many Americans already don’t know those earlier dates anyway. So far January 6 is like the other two in that it was a one-time attack on America. That could change on January 20 or in scattered state capitols throughout the country. It also differs in that it was an attack on America led by the American President and the attackers themselves were American and not foreign. Now the President is being impeached for a second time and the attackers are being arrested as may the current President may be once he loses his immunity.

But January 6, 2021, is an historic date for other reasons as well. It was a date when the deaths from the coronavirus exceeded 4000, a milestone. It also was the date the results of two Senate elections on January 5, 2021, in Georgia became known. That event would have been front-page above-the fold-news in other times. It was big news in the morning but by the afternoon it had become eclipsed. This blog is dedicated to those elections.

The movie “Hidden Figures” already has been the subject of blogs (Hidden Figures, The Right Stuff and the Coronavirus: Who Will Tell the Story?, April 30, 2020 and Negroes and the American Dream: Hidden Figures, Open Dreams, March 11, 2018). It is regrettable that so many of the movie’s great moments turned out not to be literally true The Kevin Costner character was not a historically-real person. One powerful scene in which he did not participate also was not literally true although it was symbolically true.

Karl Zielinski: Mary, a person with an engineer’s mind should be an engineer. You can’t be a computer the rest of your life.

Karl Zielinski: And I’m a Polish Jew whose parents died in a Nazi prison camp. Now I’m standing beneath a spaceship that’s going to carry an astronaut to the stars. I think we can say we are living the impossible. Let me ask you, if you were a white male, would you wish to be an engineer?

Mary Jackson: I wouldn’t have to. I’d already be one.

The Polish Jew who encourages her in the movie is fictional, but apparently the real life NASA engineer Kazimierz Czarnecki did encourage her to pursue advanced training and became her longtime mentor.

So here we have this episode of a “negro woman” and a “Polish Jew” exemplifying the American Dream in a positive and optimistic setting. Life as it should be.

The Georgia Senate elections demonstrate the exact same upbeat message as the movie scene. While Ossoff is not a Polish Jew (Russian/Lithuanian descent), the parallel is close enough.

The national implications magnify the historic importance of the elections. The very same person who instigated the insurrection on January 6 was the person who affected the results of the Georgia Senate elections to his own detriment. He had sought to “find” votes which would have made him the winner of the state in the presidential election. He had sought to disqualify votes which would have had the same effect. The U.S. District Attorney would not comply with the request to do the latter and is now gone from his job. The Georgian Secretary of State did not comply with the request for the former. He still has his job. But he has had to spend some time in hiding and has been threatened over his re-election prospects. The Republican Governor similarly has been threatened. Undoubtedly these assaults within the Republican Party along with the claim that the voting system was rigged and could not be trusted contributed to the Democratic victories.

As a result of his self-inflicted wound, the Democrats now have control of the Senate. These two votes are not sufficient to ensure that the impeached instigator of the January 6 insurrection will be removed from office and prohibited from running in 2024. In fact, by the time the Senate votes to remove him from office, he already will be out of office and quite possibly facing criminal charges. Still, it will be quite an introduction to the Senate for the two Georgians.

BLACKS, JEWS, AND THE JANUARY 6 INSURRECTION

At first glance, one would have expected that the “Stop the Steal” rally would focus on the presidential election. Certainly the actions to reverse the results by having the electors from various states be disqualified were the major focus. However, the participants communicated interests that were not directly connected to the election. Instead they relate to concerns that predate even the 2016 election. 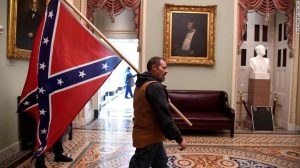 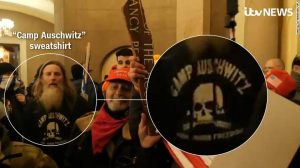 These images involve longstanding hatreds in the United States that will not disappear January 20, 2021.

One inadvertent benefit from the insurrection is that it flushed people out of the woodwork. Instead of white racists and anti-Semites restricting themselves to various websites, they appeared in open in the light of day clothed in their hatreds. Not only did they appear in public, they took selfies, posed for pictures, sent texts and emails and otherwise broadcasted their white racism and anti-Semitism. At first, it may have seemed like a lark to them. They occupied the Capitol and took souvenirs as if they had signed up for a tourist extravaganza. Now their pictures of them in the action of committing a crime are available to law enforcement organizations across the country. The people with the Confederate flags and the concentration camp T-shirts apparently never thought through the consequences of the public display of their white racism and anti-Semitism.

In these two actions on January 6, 2021, one may see two faces of America. One embraces the future, the other is scared of it. The Warnock/Ossoff elections represent an optimistic view of America’s future. The insurrection represents a fear of it. The Democrats do not have a monopoly on that future. They do not own it. It is possible the Party of Lincoln will abandon Trump and embrace the future as well. The vote in the House of Representatives in support of his effort to steal the election and the polls show a split party. The Trumpicans support the attempted coup as a great victory to be celebrated whereas the Republicans do not. At this point, it seems unlikely that the Lincoln Republicans can regain control of their Party. In that case, one can anticipate more elections like the Georgian Senate elections and more widespread violence. In other words, both aspects of January 6, 2021 will continue for better and for worse to be on display (see my comments in Grand Ol’ Prospects: Republicans abandoning Trump lick their wounds and plan their future by Leonard Greene, The Daily News, January 10, 2021).